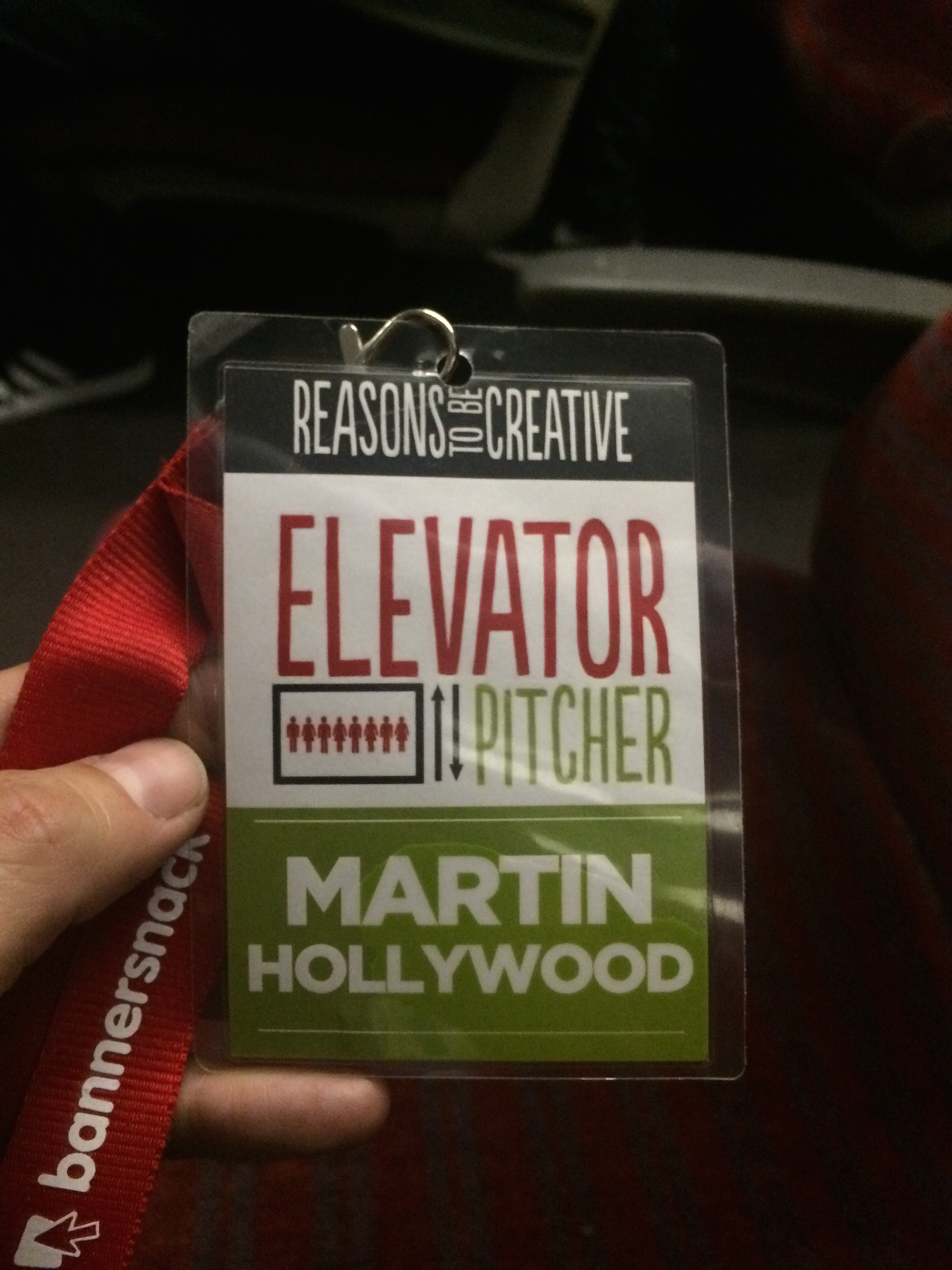 This year I wasn’t just watching. I was up there. On the mains stage!

But first, what is the event? Why would you want to go, never mind speak there?

REASONS is a 3 day conference with a festival vibe, held annually in Brighton UK. Every year the very best international creative and developer speakers take to the stage to wow, inspire, inform, entertain, thrill, teach and mix with web designers and coders that attend from all over the world. 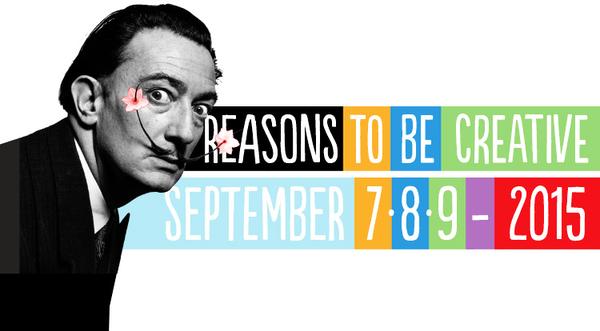 The event, which began as Flash On The Beach, celebrated it’s 10th year this week. 10 years of attracting around 1000 people from around the UK and the world. Personally, I met attendees who had flown in from the USA & Europe – and not for the first time. I met another chap with 8 lanyards from previous events around his neck!

I last attended in 2013, and was inspired by Ros Horner’s session (among others): to set myself a Goal of where I wanted to be in a year. At the end of Ros’ talk the audience were asked to write down them and hand them in, as part of a year long personal project. There’s a write up of the 2013 Reasons To HERE. 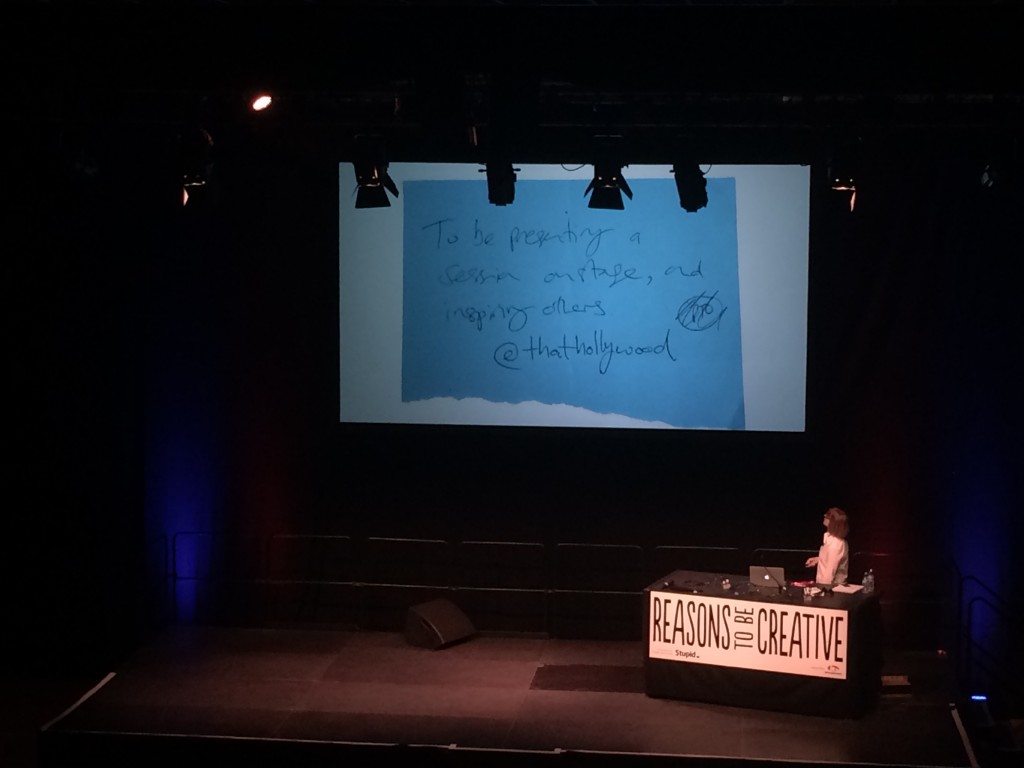 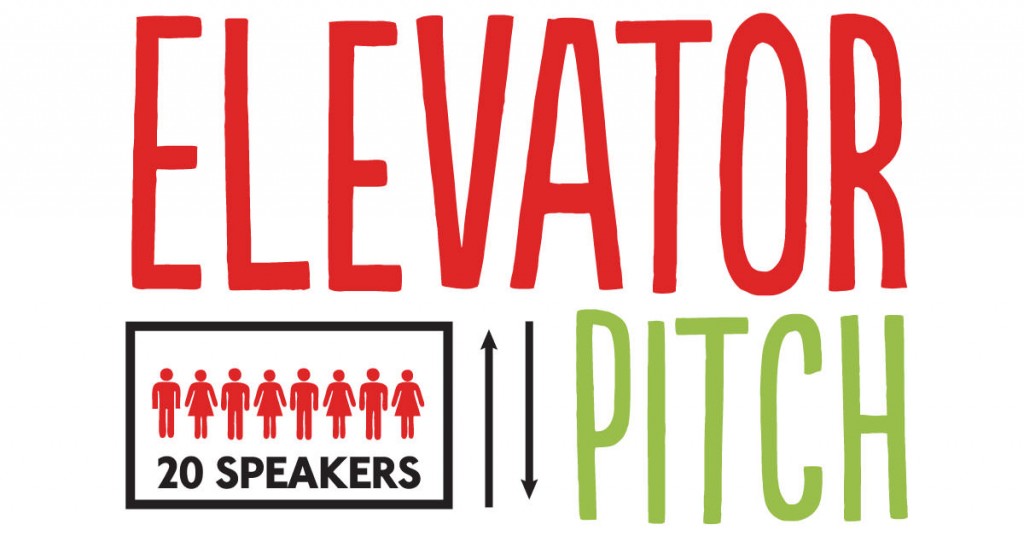 Well, true to my Goal I applied in 2014… but submissions had already closed! SHIT!!!
Better luck next year, eh? For 2015, I set myself a calendar reminder.
So, on March 11th 2105, sweaty of palm, I pressed the email Send button. Again…
…and this time was lucky enough to get picked.
Now, you’d think that in almost 6 months that would be PLENTY of time to knock 3 minutes of material together? And you’d be right. It’s almost too much!
I’m not sure how the other ‘Pitchers went about it, but mine started as some bullet pointed notes, dumb jokes and memes. I had my blog, so I had material to talk about. I think my biggest challenge, at that point was editing it down.
Throughout those months, John Davey keeps a low bubble on the social posts, so you never forget that the day is coming! Many a run and journey was spent going through what I’d say. 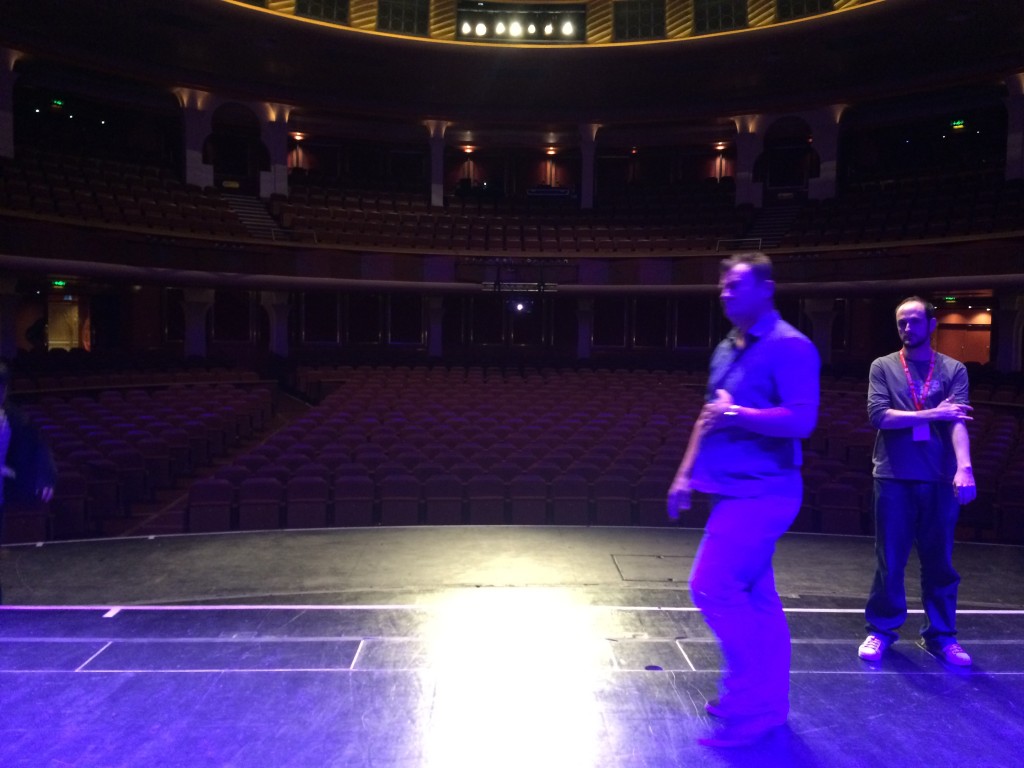 Well, the months pass and the day arrives when you board that plane or train and head for Brighton. Trust me, you’ll never be as ready as you think, and here’s one of the reasons why: Scale! The  Dome has seating for 1700, with ReasonsTo previously filling over 1100 of those. It’s not a small venue. It’s not remotely on the same scale as a MeetUp or local event.
One word that was bandied around, is ‘experience’. And it is. Although I think I’m all still trying to quantify it.
Experience [noun]
Jumping put of a plane is an experience, but then so is a Near death. It’s probably somewhere between them. Full credit has to be given to John, and the ReasonsTo ‘Lifeguards’ of whom Andy & Chris (Rockstars!) will be your guides over the next 3 days. Over the course of those days you’ll meet and work with some amazing people, with eclectic presentations spanning art and technology. 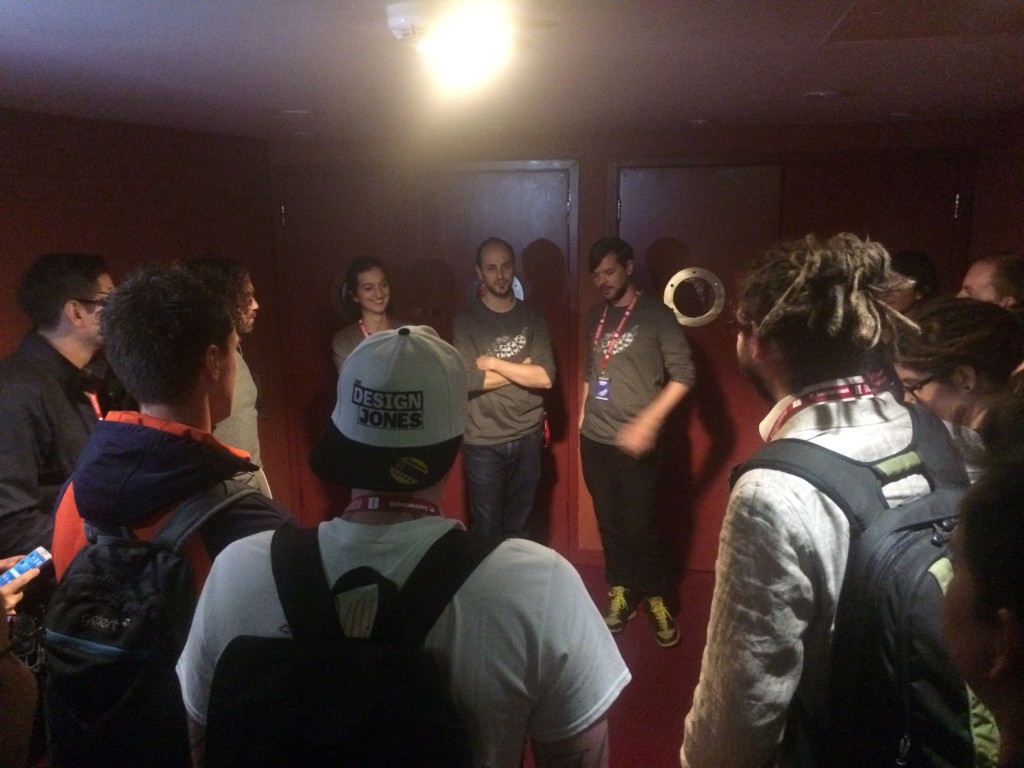 [Image: Last minute advice from Andy, Chris & Liz]
Much of the stress around the Pitches isn’t even the deck itself, but rather the logistics around getting 20 people on and off the stage in 60mins, and ensuring that each of those gets the best experience possible. No one is the centre of attention!
What this means for you is that you’ll have Tech Checks to ensure that your laptop (and equipment) is working correctly with the projector and sound system, and most importantly rehearsals adhering to the 3 minute cut off. And it is a cutoff – there is an A/B switch on the AV and you will get cutoff mid sentence is you go past it. Elizabeth was on hand as our Timer, keeping us right with calls of ’10 seconds’, and ‘Time’! 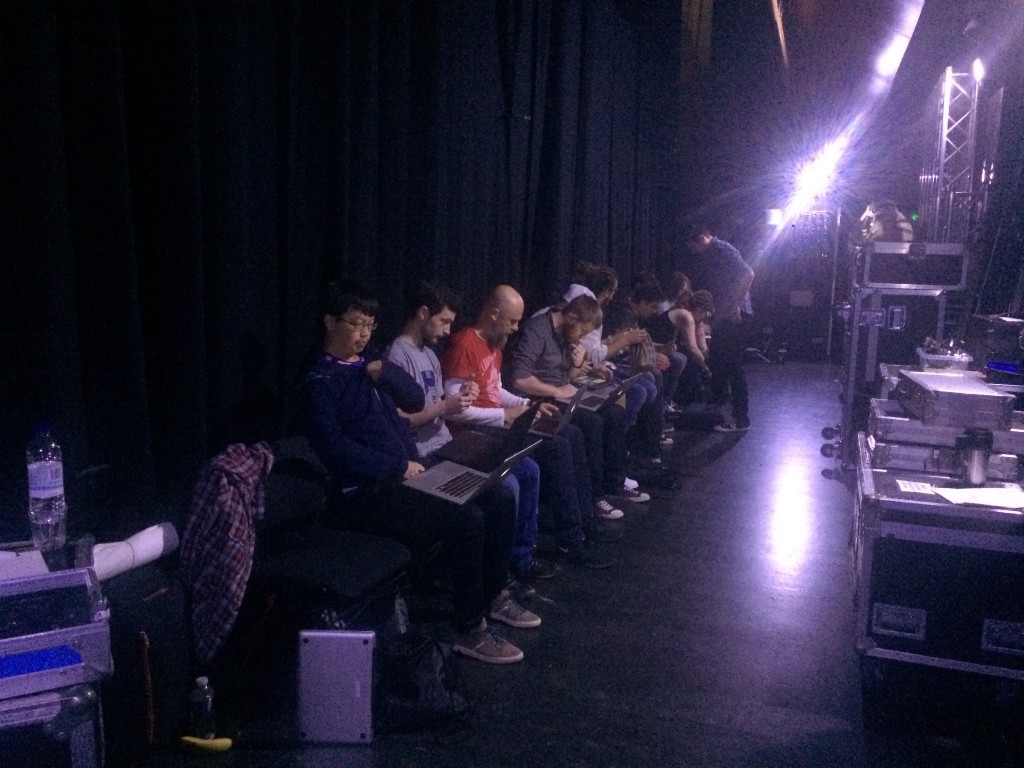 [Image: Waiting back stage]
I’d almost say that only 50% of the stress that went into my 3 minutes was the talk itself, the other 50% was the ‘theatre’ of waiting backstage and then hovering in the wings waiting for Chris to say ‘Go!’
That’s all I’m going to say on the matter though, as there’s just too much to go into and I wouldn’t want to spoil the surprise! 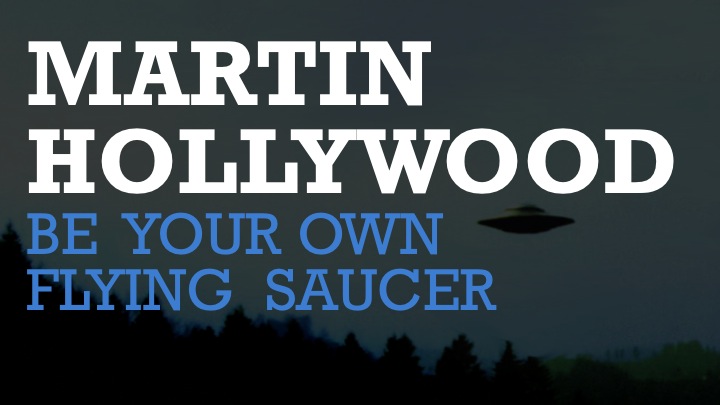 “Good morning! My name is Martin Hollywood, and welcome to Be Your Own Flying Saucer…” 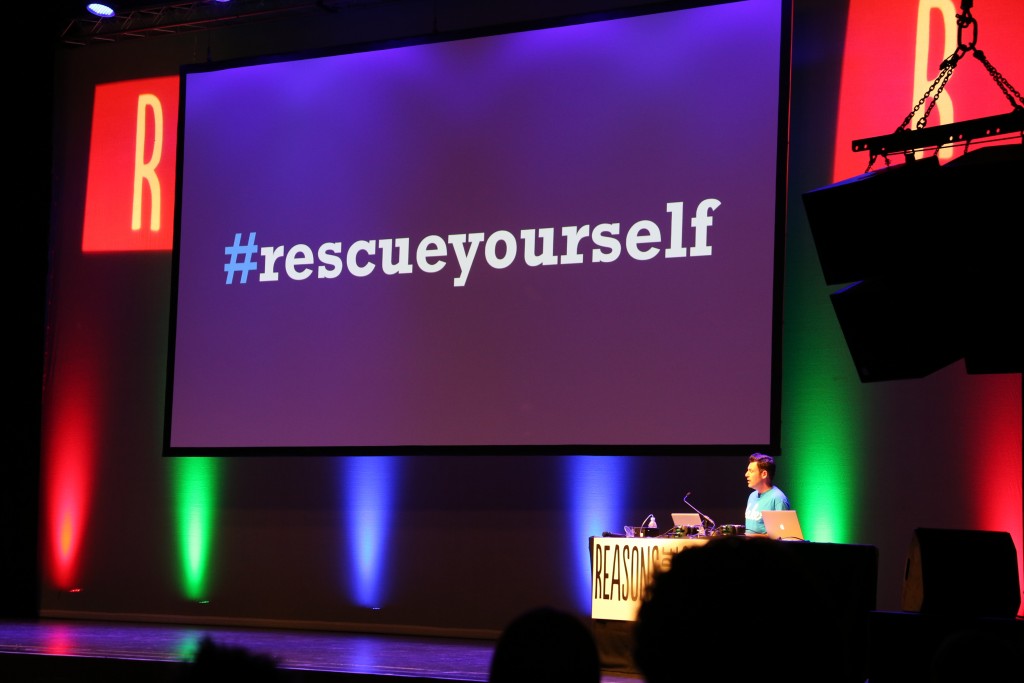 [Image: Onstage at last! Photo credit: Richard Clarke]
My talk centred around changing your career focus, and realising that your employer isn’t always the one to enable it. So personal projects are essential, that and the whole Make Something & Share It mantra. Some the projects I showed were:
I tried to make it clear that many of these can be achieved with a modicum of code, as the services I mentioned (IFTTT, Temboo) allow for Codeless Development.
My time ended with a demo of the Fizzy Good water pump that was activated by the #rescueyourself hashtag and utilising the techniques above (Arduino Yun & Temboo). This last project inspired by the debilitating hangover I had last time I’d watched the Pitches as an audience member.
The audience vote on the Top 3 pitches, and these are invited back the following year for a full one hour session. Fingers crossed!
Fancy a crack at yourself? More info can be found on the ReasonsTo site. Go on!